Last month's Deep Sky section was a trek around the multiple delights of Perseus, Andromeda and Triangulum.  This month we will examine the nearby constellations of Camelopardalis and Auriga.

Starting at the top - or very close to the North Pole (with suitable apologies readers in the Southern Hemisphere) - we begin with the rather uninspiring constellation of Camelopardalis.  Camelopardalis represents a Giraffe in the sky, its name being a rather literal amalgamation of "Leopard" and "Camel".  While those who have seen a Giraffe up close will marvel at the scale and majesty of this peaceful, unassuming animal, the same cannot be said for its representation  in the sky.  When the principle star of a constellation - in this case Beta Camelopardalis - is only +4 mag in brightness.  As a constellation, Camelopardalis is a relatively new one, being added to the sky in 1612 by Dutch Astronomer Petrus Plancius and not being one of Ptolemy's original 88.

Maybe it is because of Camelopardalis' relative obscurity and lack of bright stars that two very worthy objects for observation were overlooked by Messier and his correspondents during the compilation of his original list.  The first of these is the wonderful galaxy NGC2403, which Herschel first catalogued in in 1788 - surprising maybe as this target can easily be seen in large binoculars from a decent site.  Spiral in structure, NGC2403 is not presented fully face on, but at an attractive angle that benefits both surface brightness and a clear view of its architecture.  23.4 x 11.8 arc minutes in angular size - roughly the same size as M81 - and 8.5 mag in brightness, NGC2403 can be seen clearly in small telescopes, while larger instruments will show a suggestion of spiral structure and knots of nebulous material in its arms.  In this way, NGC2403 is akin to a mini-M33, the Triangulum Galaxy - and is a treat for both visual observers and Deep Sky Astrophotographers too.  NGC2403 is part of the M81 group of galaxies in neighbouring Ursa Major and lies around 10 million light years from us.

Just under 23 degrees to the west of NGC2403 lies the second of Camelopardalis' Deep Sky treasures, the wonderful face-on spiral galaxy IC342.  This object is a true victim of celestial geography, as it lies close to the plane of our Milky Way galaxy and is obscured - as are many other objects in Camelopardalis - by interstellar dust surrounding our galaxy's main spiral arms.  Estimates are varied, but this dust is generally though to have decreased the brightness of IC342 by 2.5 magnitudes.  At +8.39 mag, it is of reasonable brightness, but would be a dramatically easier object were it not for us seeing it through the veil of our own galaxy.  At 21.4 x 20.9 arc minutes in diameter, it is one of the larger observable galaxies in the heavens and a fantastic subject for imagers.  Visually, IC342 is not in the same league as neighbouring NGC2403, as it is of low surface brightness.  Observers with reasonable sized telescopes will see the glowing core of this target but little else.  Much larger instruments are needed - and dark skies - to see much else of IC342's extensive spiral structure.  However, long duration photography is on and to give us a real idea of quite how beautiful this object - said by many to be an analogue of our own Milky Way's make-up - truly is.  Lying just 7 million light years hence, IC342 is not a true part of our local group, but is certainly close enough to have had some gravitational interaction with our own group of galaxies.

Sliding down the rather dim forelegs of the Giraffe, from IC342, we come to into neighbouring Auriga, the Charioteer, and its principle star, Capella, or Alpha Aurigae.  This is the sixth brightest star in the sky at +0.08 magnitude and the brightest, most northerly star in the sky.  Capella is actually a binary star and once of the first to be found by spectroscopic observation, where it was found to have two spectra, overlaid on top of each other, which appeared to doppler shift in relation to each other - hence it became known as a spectroscopic binary.  The two stars in the system are orbiting each other by 0.75 AU - three quarters of the distance of the Earth to the Sun.  As they are so close, even lying at a comparatively close 42 light years, they cannot be split, even with the largest telescopes on Earth.   The system also comprises of two additional red dwarf stars lying much further out.  The two main components are similar spectral class to our Sun (G class), but much bigger and classed as giants.  They are thought to be much further along their lifespan than the Sun is and have run out of hydrogen as nuclear fuel and are now “burning” helium and in the case of one, carbon.  Neither are thought to have enough mass to go supernova at the end of their lives and are likely to end up as planetary nebulae.

Moving to the southern part of the constellation, we find to the Flaming Star Nebula, IC405.  Found just under 12 degrees almost due south of the Capella, this object is a partial emission, partial reflection nebula, meaning that one part of its structure glows under excitement from radiation, whereas the other part merely reflects light from the stars embedded in the object.  Measuring around 30 x 19 arc minutes, IC405 is centred around the star AE Aurigae, a star which was ejected from the nearby Orion Nebula under 3 million years ago.  At +10 mag, it is not an intrinsically bright object, but condensed enough to be seen in small telescopes from a decent location.  It is unsure if any of the material that makes up the Flaming Star Nebula was once a part of the Orion Molecular Cloud - it is more likely that it is material that the star is merely passing through.  As previously mentioned, this is an area rife with gas and other star forming material.  IC405 lies some 1500 light years from Earth. 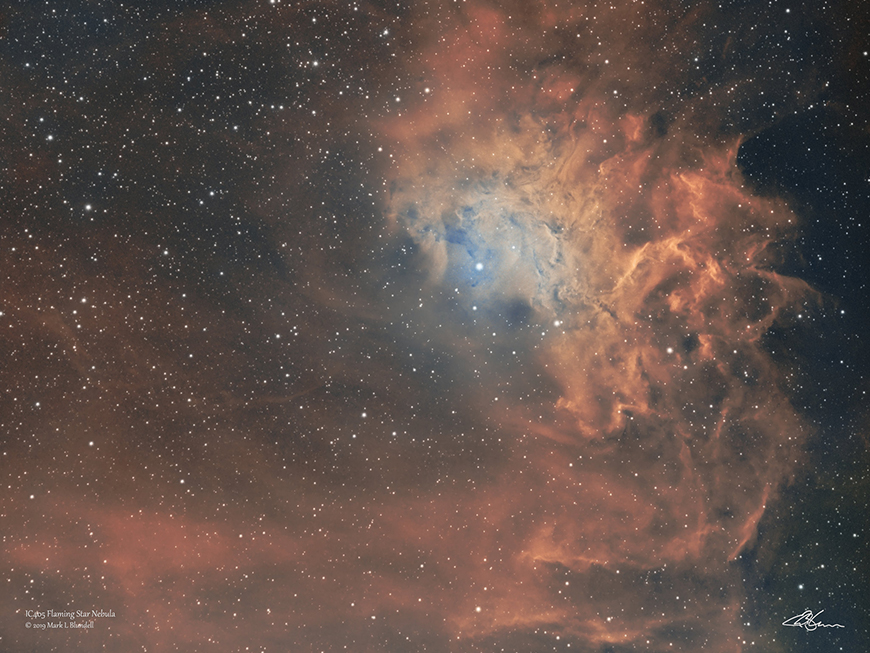 Just under 3 degrees to the NE of the Flaming Star lies the first of Auriga's three great open star clusters, the lovely M38, otherwise known as the Starfish Cluster.  It's difficult to see exactly what resemblance this +6.4 mag, 20 arc minute diameter collection of stars has to the titular marine invertebrate, but it is certainly a pretty sight in any sort of optical instrument.  M38 was first recorded by the preeminent Sicilian astronomer Giavanni Batista Hordierna in 1654 and re-squired much later by French observer Le Gentil in 1749.  Le Gentil's observations alerted Charles Messier to M36's location and it was included in his original list in 1764.

At over a third of a degree angular diameter, M38 is ripe for observation in most telescopes and binoculars.  Observers will note long chains of stars, many of which are blue, but there are also some lovely contrasting yellow and gold-coloured members.  In total, M38 has around 100 stars as members and lies around 4200 light years from us.  It is thought to be around 200-225 million years old. 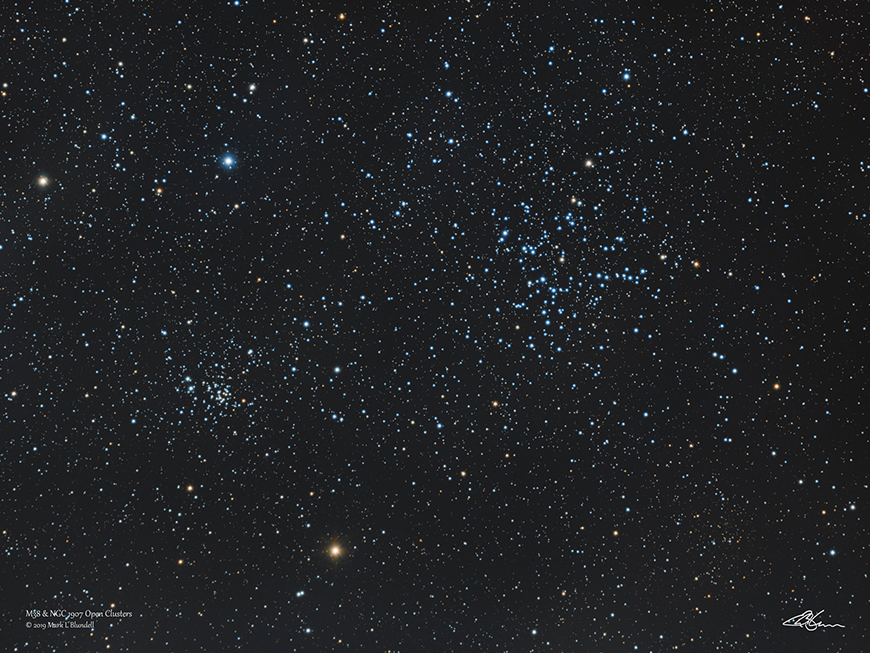 M38 and the smaller NGC1907) by Mark Blundell.  Image used with kind permission.

2 and 1/3 degrees to the SE of M38 we come to the second of Auriga's great clusters, M36.  This cluster is a good deal more compact than its neighbour at 10 arc minutes diameter and slightly brighter as a resultant +6 mag.  Through a telescope, this collection of hot white stars can appear quite brilliant in comparison to M38 - indeed, it is said that if M36 were placed in the position of the Pleiades, it would outshine them by a factor of three.  M36 was again discovered by Hordierna, in 1654, rediscovered by Le Gentil and added to the Messier list in 1764. 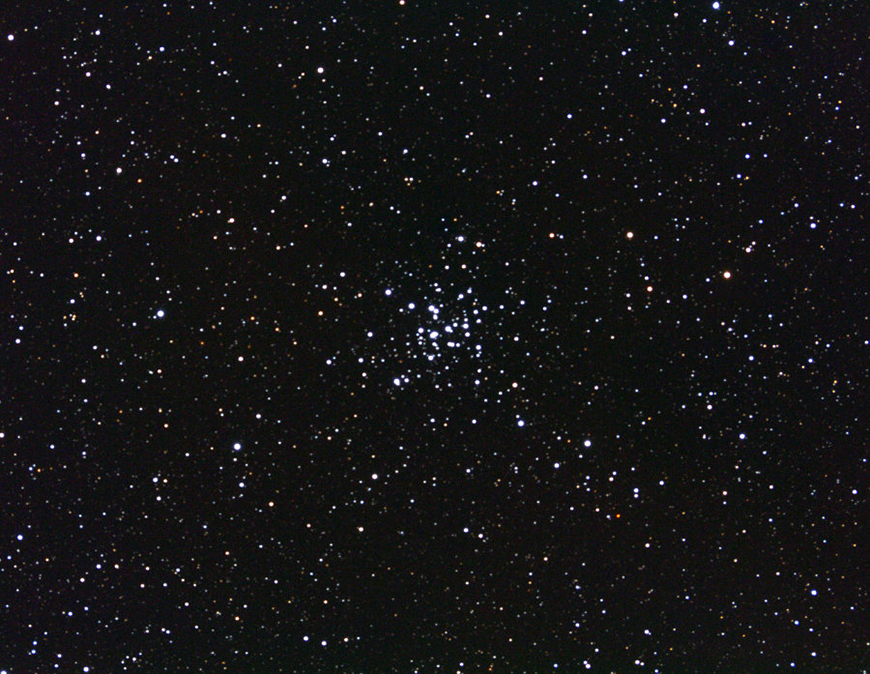 This cluster is a good deal younger than its neighbour and contains many young hot blue main sequence stars, of spectral type B2 and B3.  There are no older population stars to speak of in M36, so it is thought to be just 25 million years old.  Lying at around 4300 light years hence, M36 is one of the many objects that share the moniker "The Pinwheel" - though apart from a circular collection of stars to the NE side of the cluster, it is difficult to see why it has picked up such a name - especially in the light of the other "Pinwheels" in the sky.  Perhaps we should come up with a new more original nickname for this great cluster - it deserves better.

The last of Auriga's fine open clusters is its best - the spectacular M37.  There are many great clusters in this area of sky: the much nearer Hyades, Pleiades, Beehive, the nearby M35 in Gemini and the Double Cluster in Perseus - but M37 is one the most beautiful of these and is a lovely sight is any telescope or binoculars.  At a quarter of a degree in diameter, M37 is about the same angular size as the Full Moon in the sky.  It is also the brightest of Auriga's "Trio" at +5.59 mag and the oldest at an estimated 300 million years of age.  Like its neighbours, M37 contains many hot blue stars, but also significantly many more mature yellow , orange and red giant stars.  This more evolved stellar population makes for some fine viewing for we astronomers here on Earth as the blues of the newer, hotter population contrast superbly with the warmer tones of the older stars.

M37 was again discovered by Hodierna, though almost inexplicably was missed by Le Gentil - Messier himself found it again at catalogued it in 1764.  M37's total stellar population is thought to number in the 500+ levels, of which maybe 150-or-so are observable in amateur telescopes.  It is the furthest lying of Auriga's clusters at 4500 light years distance and the largest at 25 light years across.

©2021 Bresser UK Ltd. All rights reserved. All logos and trademarks in this site are property of their respective owner.
Display cart
Cookie guidelines
This website uses cookies to ensure you get the best experience on our website. Cookie-related information