Another two and a half degrees to the SW of M100 lies another treat for fans of spiral galaxies, the lovely M98.  At +10.10 mag, it is not especially bright for a Messier list object (remember, most of the members of this list were discovered with a 2.5-inch refractor).  But whereas M100 is presented face on, M98 shows a very different, foreshortened aspect, which concentrates its light.  At 9.8 x 2.8 arc minutes in  dimensions, M98 is longer, yet substantially thinner than its neighbour and a barred spiral structure.  Again, this galaxy was discovered by Mechain and catalogued by Messier in 1781.  Modern observers with small telescopes will see M98 as an elongated patch of light, though those with larger instruments will begin to glimpse traces of mottling of its inner darker lanes.  Although there is still a reasonable amount of star formation going on within M98, as evidenced by a healthy young blue star population, much light output from this galaxy is shifted towards the red by the amount of dust and substantial HII regions of ionised Hydrogen - areas similar to the M42 region of our galaxy.

Long duration astrophotography of M98 reveals a notable kink and trail from its leading spiral arm. This, in addition to an unusual blueshift in its spectral signature suggests that M98 may have had a recent (galaxially-speaking) encounter with neighbouring M99.  It had been suggested when this blueshift was first discovered that M98 was a much closer object than its neighbours, but this postulated tidal encounter now seems to explain this phenomenon more elegantly.

A degree and a third East of M98 lies the aforementioned M99, otherwise known as the Coma Pinwheel Galaxy (to differentiate it from M33 in Triangulum, confusingly known as the Pinwheel too).  Like M100 and M98, it too is a spiral galaxy, but is presented face on rather than edge on, like M98.  It is noted in some sources that Mechain discovered all three galaxies in the same night - 15th March 1781 - not bad going for an evening's observations!

M99 is a compact (5.3 x 4.6 arc min) object of +9.89 mag.  It lies a little further from us than do its neighbours, at 53-55 million light years distance.  M99 has the distinction of being the second spiral galaxy (more accurately, Spiral nebulae) to be recognised us such by Lord Rosse, after observations in the Spring of 1846.  What Lord Rosse achieved with his enormous "Leviathan of Parsonstown" telescope, can be more easily achieved by modern instruments with more effective optics.  Roger Nelson Clarke writes of M99 in Visual Astronomy of the Deep Sky that  "In the 8-inch, the central portion appeared was a small, bright diffuse area, while the spiral arms formed a soft uniform glow around it.. …detection of the bright southern spiral arm has been reported by observers under good to excellent skies with 8-inch telescopes."  Again, detection of spiral structure in M99 (much as many of the major spiral galaxies) will really need a larger telescope (12-inches +) and really decent skies - but once seen it will not be forgotten.

M99's Southerly arm appears dominant and slightly further extended than the less obvious Northerly arm, giving the galaxy a somewhat lopsided appearance.  This could have been due to gravitational interaction with a number of bodies, the aforementioned M98, but more likely the nearby NGC 4262 or the exotic VIRGOHI21.  This latter object is a so-called "Dark Galaxy" - a region of gas that appears to contain a significant amount of Dark Matter - equivalent to the mass of a small galaxy - but no stars.  However, debate rages as to whether Dark Galaxies even exist, with other theories suggesting that the VIRGOHI2I region is simply a large detached area of gas from one of the galaxies in this region.  If this were so, this object should contain some stars - which confusingly it doesn't!  Further observations and theories are needed to explain exactly what is going on in this area of the cosmos. 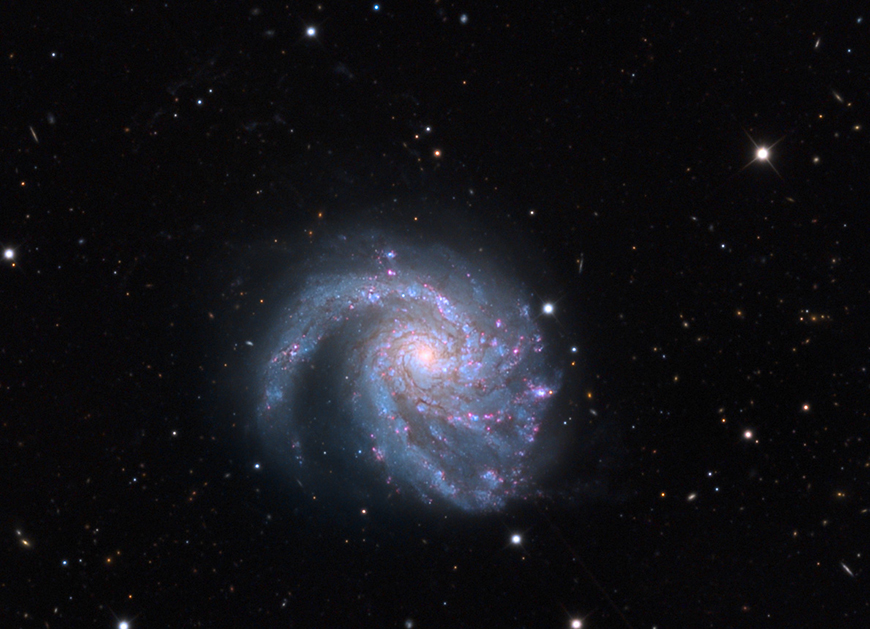 3 degrees to the E of M99 lies the another attractive spiral galaxy, M88 - and another degree and a half further E is the face on barred spiral galaxy M91.  Of the two, M88 is the better object for observers with small telescopes.  Whilst it is not edge on, (some sources list it as inclined by 36 degrees, others by 64 degrees) M88 is well presented to us on Earth, its foreshortening adding to the overall surface brightness of this 6.8 x 3.7 arc minute, +9.6 mag object.  Unlike many of the previously mentioned Messier objects, M88 was actually discovered by Charles Messier, rather than Mechain, on March 18th 1781.  The spiral nature of M88 can be seen in reasonable sized instruments, given good sky conditions and generous (probably x150+) magnification.  As a good example regular spiral, this galaxy should be high on the list of potential targets in this region of sky. 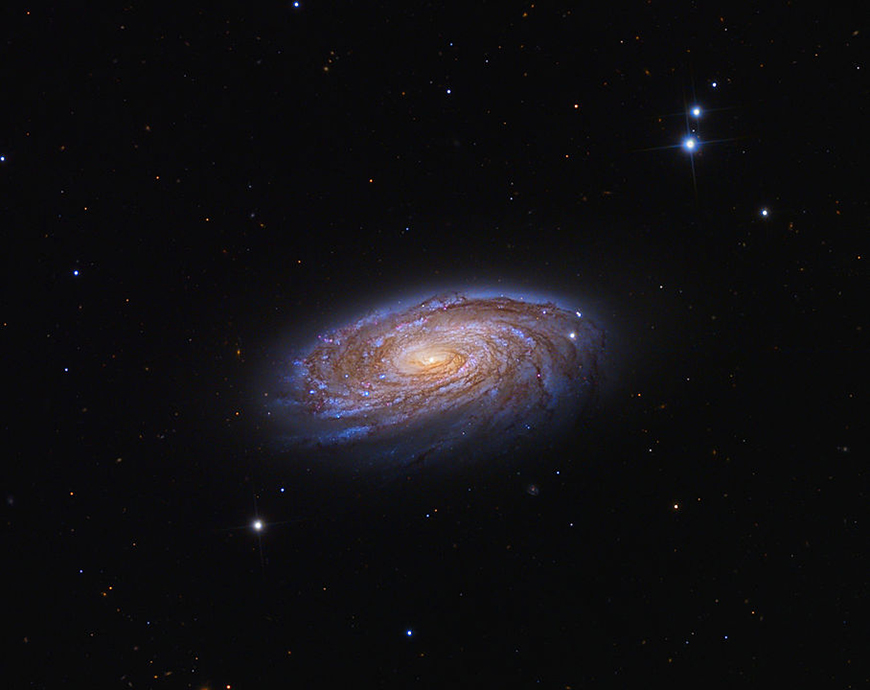 M91, on the other hand, is a more problematic object.  at +10.19 mag it is amongst the faintest of the Messier list.  Indeed, it was only in the latter half of the 20th century that it was even definitively recognised as a member at all.  M91 was a supposed "missing Messier" - an object with a clear listing and description but an imprecise location.  It was only in 1969, after US amateur astronomer William C Williams followed Messier's stated directions to this object from M89, rather than the listed M58, that the mystery was brought to a close (though William Herschel had suggested it as a possible candidate nearly 200 years earlier).

Whereas M88 is of a high surface brightness, M91 as a 5.2 x 4.2 arc min face on galaxy is very low. Decent sky conditions and a larger instrument (8-inches +) will be needed to glimpse its central bar.  It is only in long duration astrophotography that this galaxy really comes alive.  Imagers will reveal the true nature of this lovely object , with its two graceful widely-sweeping arms, condensed core and generous bar.  M91 is rather poor in terms of star formation and whilst one of the larger barred spirals in the Virgo group is rather further away from us than many of the other major members, at 51-55 million light years distance. 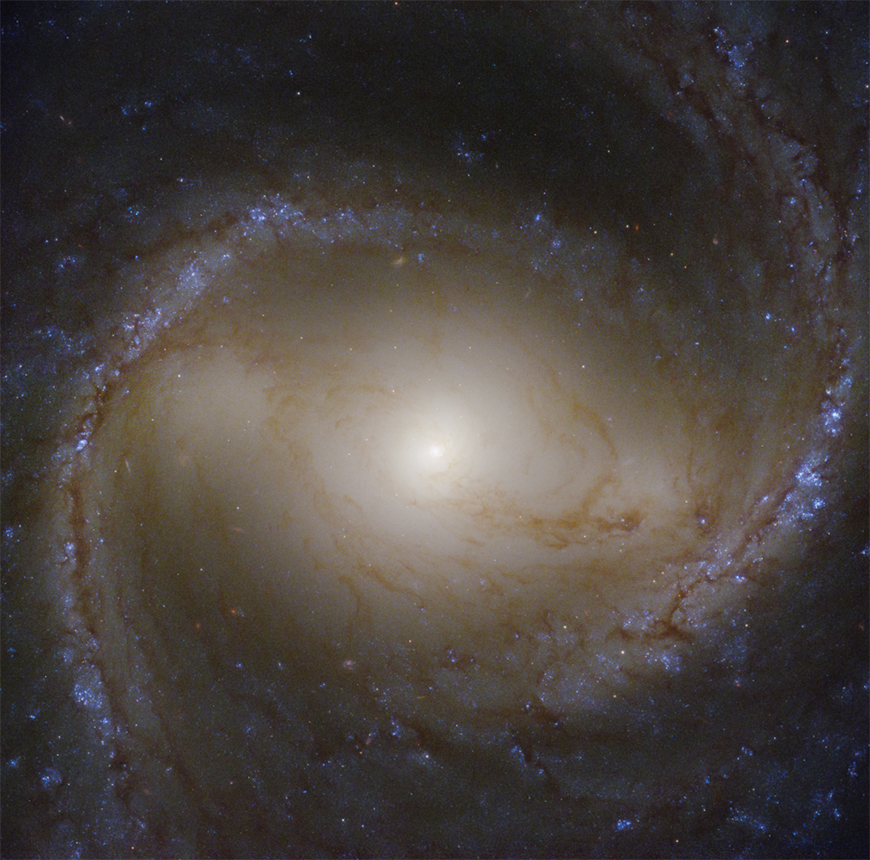 Just under a degree SSW of M88 lies the small +10.19 mag spiral galaxy of NGC 4477, which in turn marks the beginning of a glorious 1.5 degree long arc of galaxies known as Markarian's Chain.  This gently curving line of galaxies is one of the finest sights in the sky and an almost peerless photographic subject from a galaxial point of view and where we will start next month’s Deep Sky Delights over the border into the massive constellation of Virgo.

©2021 Bresser UK Ltd. All rights reserved. All logos and trademarks in this site are property of their respective owner.
Display cart